The Governor declared a toll-free passage at the toll plaza on Lekki-Epe Expressway and the Lekki-Ikoyi Link Bridge between 6:30am and 9:30am in the morning, and also at the peak period in the evening (4:30pm to 8pm).

The Governor disclosed this during a tour that followed a stakeholders’ meeting on regeneration of the Lekki-Oniru and parts of the Victoria Island as solution to the perennial traffic gridlock and flooding issues around the Lekki and Ajah areas.

The objective, according to Governor Sanwo-Olu is to allow traffic consultants to the government carry out a comprehensive study of traffic flow around Lekki-Ikoyi-Victoria Island axes, which is part of the initiatives the government is bringing to diffuse vehicular gridlock in major Business Districts in the state.

The cost of the toll fees for the study period will be borne by the government, Sanwo-Olu said.

The Governor said: “Tomorrow being Thursday, the toll plazas on the Ikoyi Link Bridge and Lekki-Epe Expressway will be left open between 6:30am and 9:30am in the morning and also between 4:30pm and 8:00pm in the evening. This is to allow us to do a real simulation of traffic study in these areas that usually witness high density of vehicular movement daily.

We are currently undertaking a traffic study with our experts and we want to know where the traffic goes to when the tollgates are left open for steady movement. It is only when we do this activity at the peak hour that we will be able to understand how to deal with congestion in these places.”

Sanwo-Olu said the undertaking was necessary for the government to take actions that would lead to reduction of traffic on the axes by 50 per cent. The resultant effect, he said, would lead to decrease in travel time and improved productivity.

“Our government wants to bring about a quick journey time through our traffic solution. The way we want to do it is to have an online real-time study of what the issues are. We are going to analyze the dimension of observed challenges and discuss next steps of solution we are bringing,” the Governor said.

As part of the measures being initiated to achieve free flow of traffic, Sanwo-Olu hinted that the mode of toll collection at the Ikoyi-Link Bridge would completely go electronic, disclosing that a new method of payment would take off in October. The Governor urged motorists plying the route to apply ahead for electronic access cards at Lagos Tolling Company in compliance with the new service.

He said: “In October, the partners that we are working with will introduce a software that will allow electronic collection of toll fees. This means that motorists will not be paying cash. The process to implement this is on, and we will come up with a seamless electronic solution. We are giving three months notice to residents and motorists to prepare ahead. By the time this is done, we believe some of the bottlenecks in and around Ikoyi would be reduce and we are hoping there would be free flow of traffic.”

He added that the size of the roundabout at the Admiralty road would be reduced for the purpose of traffic diffusion.

The Governor also visited the scene of last week Monday flood in Abraham Adesanya Junction to inspect the cause of the clogged drainage in the area. Sanwo-Olu said Office of the Drainage Services had been given a task to ensure free flow of water in the clogged drainages and canals in Ajah area.

He said: “Our stop at Abraham Adesanya Junction in Ajah area was to take necessary assessment of the condition of drainage in the area. We have identified things we need to do to have free flow of water from the area to the lagoon. We are also looking at reduction of the size of the roundabout there. We are coming out with a comprehensive traffic and drainage solutions at the Abraham Adesanya area.

“We have had several complaints about how long it takes people moving around Ajah Bus Stop. We are going to push a major layby, where we can take commercial vehicles off the road. We have realized that commercial vehicles are the major cause of traffic at the spot. We are going to push the layby there and cut it off, so that motorists moving inward to Victoria Island can have an easy way. We are looking at both lanes to reduce journey time.” 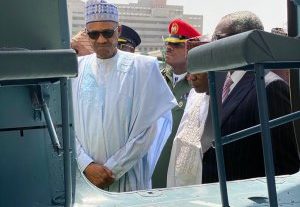